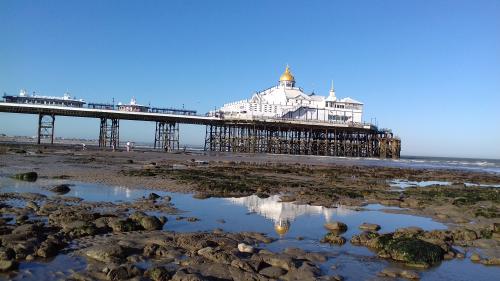 Devonshire Park - the home of tennis on the south coast

The Nature Valley International boasts a fantastic line-up of world-class tennis as a combined men's and women's event. It is a WTA Premier level and ATP 250 level tournament based at Devonshire Park. 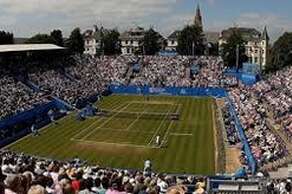 The award-winning Airbourne celebrates 28 years of airshow excellence in 2020.

Ground displays open 10am - 6pm daily, with flying from lunchtime until approx. 5pm.


Book your stay with us now to save disappointment. 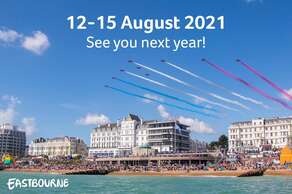 Theatres in Eastbourne include the Congress Theatre, Devonshire Park Theatre, Royal Hippodrome, Winter Garden and the Underground Theatre. Offering a year round programme of shows including touring West End musicals, drama, comedy, live music, children’s shows and so much more. 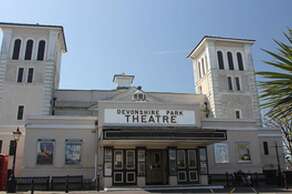 The iconic 1930s bandstand is located directly on the beach front, with open views of the sea. The Bandstand is still thriving, and has over 140 performances and concerts each year. It makes a great place to visit with its unique architecture and picturesque setting. The bandstand also has many firework displays throughout the year. 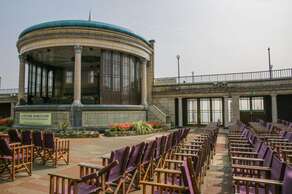 Eastbourne is famous for its clean, safe bathing beaches and its two-mile promenade leading past the pier, the spectacular carpet gardens, the famous 1930s Bandstand, the historic Napoleonic towers and seafront cafés.

Eastbourne is well established within the top ten UK beaches;our beaches are varied and have something to offer everyone, they are shingle beaches with sandy stretches at mid to low tide. 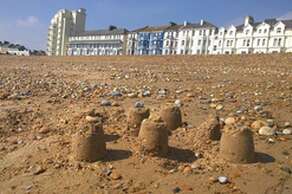 Discover white wood anemones against the backdrop of the green leaves of the emerging bluebells, a period of white, green and blue from the early bluebells and finally the masses of English bluebells dominate the woodland floor, which on a warm day have their unique fragrance.

6 more walks of up to 3 miles and back are over farm land and one can view milking of a 400 cow herd. Children can see close up, mother sheep &their lambs, pigs, angora goats, and baby chicks, also a Quiz Sheet to take as they walk round. 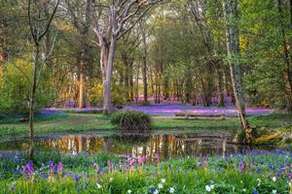 England’s longest water filled moat surrounds the site which dates back to 1229.
Explore Michelham’s fascinating 800 year history, from its foundation by Augustinian canons, through the destruction caused by the dissolution of the monasteries in Tudor times and into its later life as a country house.

One of the Society’s places to visit in Sussex and ideal for a family day out. As well as the historic house, additional highlights include
-seven acres of grounds with kitchen garden and medieval herb garden
-working watermill
-working forge
-interactive medieval gallery in the 14th century gatehouse
-replica Bronze Age roundhouse
-children’s play area
-trails, dressing up and hands-on activities throughout the house
-newly refurbished caféand gift shop
-regular events throughout the year 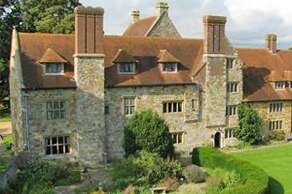 The Sussex coast claims to be the sunniest place in the UK and the perfect place for a great day out.

The red and white striped Eastbourne Lighthouse, brought into service in 1902, is an iconic landmark on the British coastline sitting 500 feet below the cliffs of Beachy Head. The lighthouse still operates at night to guide passing mariners, its light providing an effective range of up to 8 nautical miles across the English Channel.

Birling Gap offers a chalk and shingle beach great for rock pooling and fossil hunting at low tide. With a south west facing beach it is very popular with surfers and kite fliers too so really whatever sort of thing you fancy doing there's plenty of it here!
The 50 steps from the car park lead down to a safe spot for paddling .

There are excellent walks on the South Downs Way over the Seven Sisters hills, and this area is really populous with butterflies. 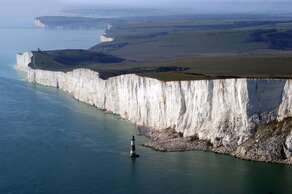 This 15th Century moated castle is set in 550 acres of glorious woodland and gardens. Visit the tearoom, visitor centre and children’s woodland play area and take a leisurely walk along the nature trail. Don’t forget the beautiful gardens. The castle operates as an International Study Centre and is not freely open to the public. We do conduct organised tours at an extra charge. Please check our website for times and prices.

Events at this venue - Please check website for other events and further details. 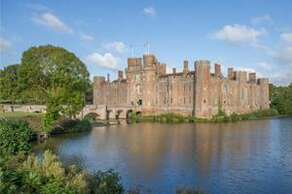 Lewes is the county town of East Sussex and formerly all of Sussex. It is a civil parish and is the centre of the Lewes local government district. Its population is now around 17,000. The settlement is a traditional market town and centre of communications and, in 1264, it was the site of the Battle of Lewes. The town's landmarks include Lewes Castle, the remains of Lewes Priory, Bull House, Southover Grange and public gardens, and a 16th century timber-framed Wealden hall house known as Anne of Cleves House. Other notable features of the area include the Glyndebourne festival, the Lewes Bonfire and the Lewes Pound. One of the most popular villages in East Sussex, and for good reason. Alfriston is one of the oldest villages in the county. It was founded in the Saxon period and became a market town in the Middle Ages.

The village boasts a pair of intriguing historic inns. The Market Cross was a famous smuggler's haunt during the 18th century, headquarters of a gang headed by Stanton Collins.

The other inn is the Star Inn, an attractive building which dates to the 15th century. The Star was built as a stopover place for pilgrims on their way to the shrine of St Richard at Chichester.

But the most famous historic building in Alfriston is probably Clergy House, a thatched, half-timbered Wealden hall house built in the 14th century. Clergy House was the very first property acquired by the National Trust in 1896. Clergy House offers a wonderful glimpse into how our ancestors lived during the medieval period, and how their houses were built. The house is surrounded by a traditional cottage garden.

And while visiting Alfriston, pop into the parish church of St Andrews. This lovely old building has been called The Cathedral of the Downs. It was built around 1360 in a cruciform shape topped by a central tower and slender spire. 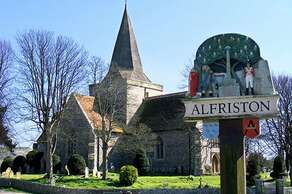 Built in 1385 to defend the surrounding countryside and as a comfortable dwelling for a rich nobleman, Bodiam Castle is one of the finest examples of medieval architecture. The virtual completeness of its exterior makes it popular with adults, children and film crews alike. Inside, although a ruin, floors have been replaced in some of the towers and visitors can climb the spiral staircase to enjoy superb views from the battlements. Discover more of its intriguing past in an introductory film and new exhibition, and wander in the peacefully romantic Castle grounds.

Please contact us for up to date opening and admission information or see our website for more information. 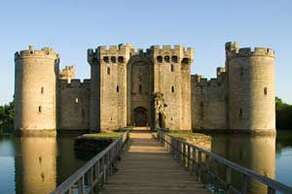 Brighton was once the seaside bolthole of the Prince Regent –and his legacy is found in Regency architecture, fine parks and bejewelled churches. He also bestowed his libertine attitude on Brightonians. Throughout the city, established museums mix with quirky experiences.

Prince Regent’s farmhouse turned pleasure palace –the Royal Pavilion –is Brighton’s most distinctive icon. Built between 1787-1823, this dinky mock-Mughal extravaganza is a riot of jelly-mould domes and twiddly minarets. The best, most excessive bits though, are inside:the Music Room’s flying dragons and swirly carpets, and its much-gilded Banqueting Room.

Just north of Brighton pier is a warren of atmospheric alleyways and 'twittens' affectionately known as The Lanes. Originally fishermen’s homes and the heart of 18th century Brighthelmstone village, they’re now given over to jewellers, gift shops, pubs and cafés. Some lanes are so narrow you’ll rub shoulders with fellow gawkers, but this historic area is worth an exploration, particularly those alleys that encircle Meeting House Lane.

Brighton Pier is still the place for shot-in-the-arm seaside fun. Spend a few hours playing the slots, riding the dodgems and scoffing candyfloss and too many doughnuts. Don’t miss the retro-tacky ghost train and vertigo-inducing Air Racer.

Float above the city and seafront in Brighton’s futuristic 'vertical pier' – the British Airways i360. This is the world’s tallest moving observation tower, featuring a glass doughnut-shaped viewing platform that gently glides 138 metres above the city and Sussex coastline. The ride lasts 20 minutes and offers views over gardens, church spires and genteel Regency squares before spiralling towards the Downs and Beachy Head. 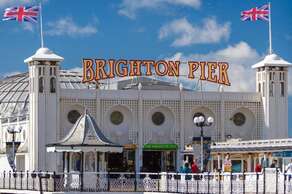 Hastings is a town on England’s southeast coast. It's known for the 1066 Battle of Hastings, fought on a nearby field where Battle Abbey now stands. The Norman ruins of Hastings Castle, once home to William the Conqueror, overlook the English Channel. East along the shingle seafront of Stade beach, Hastings Fishermen’s Museum and Shipwreck Museum document maritime history. The Jerwood Gallery shows contemporary art. 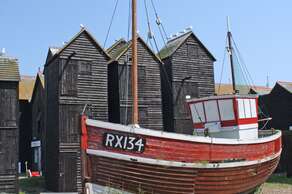 The attractive town of Battle gets it name from the Battle of Hastings, which was fought between Harold the Saxon king and William the Conqueror in 1066. The battle was so significant it changed the course of English history. The town grew up around the Abbey of St Martin which was built by William the Conqueror after the battle. It is said that William vowed that should he win the battle he would build such an abbey. The abbey was built between 1070 and 1094, and the high altar is believed to have been placed on the spot where Harold fell. Today the Abbey ruins and the battlefield are cared for by English Heritage and are well worth a visit. The imposing Abbey gatehouse built circa 1338 can be seen as you look down the length of the High Street.

Battle has some notable Georgian buildings along its High Street. The cottages and houses near the Abbey date from around 1700. The parish church of St Mary was built in Norman times and for the most part is 12th century in construction. It offers the visitor rare 14th century wall paintings and a Norman font amongst other things. At the Northern end of the High Street can be found the Almonry which was built in 1090 and now houses the Town Council and the Battle Museum of Local History. Hundreds of years ago, Rye was surrounded on all sides by water. It formed part of the medieval Cinque Ports with the town's hilltop vantage point useful for detecting and repelling marauding invaders.

Today, you can explore cobbled alleys lined with untouched historic buildings –from medieval relics to beautiful Georgian houses. Ypres Tower, built in 1249 to defend the town, is still open for viewing.

Rye has managed to retain most of its charm and heritage –as well as a sense of the strange! Walk along Mermaid Street and you'll come across houses with names like “The House Opposite”, or the “House with Two Front Doors”.

You can also see the remnants of Rye's smuggling past throughout the 18th and 19th Centuries, with networks of tunnels, secret passages and hidden caves. A long-time favourite with poets, artists and craftspeople, Rye is a unique, stunning and inspirational place.

The stunning stretch of beach at Camber Sands is just a few miles away from Rye. Camber Sands is famous for its long ridges of sand dunes leading down to miles of golden sands. At low tide it can be over a mile to the water’s edge, making it a wonderful open space for children to run around. 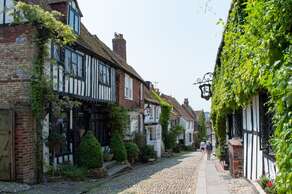 Other attractions include the Sovereign Harbour Marina which has a wide selection of restaurants, bars and shops. There is also the Eastbourne Miniature Steam Railway Adventure Park. 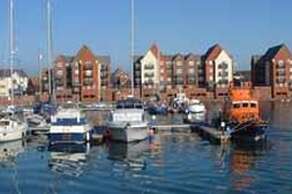